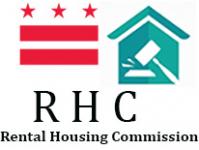 Office Hours
Monday to Friday, 8:30 am to 4:30 pm, except Districtwide closures

The District of Columbia Rental Housing Commission (RHC) is the administrative court and regulatory body responsible for the impartial interpretation, implementation and enforcement of the Rental Housing Act of 1985, as amended (Act).

The RHC: (1) certifies and publishes the annual, general rent adjustment; (2) issues, amends, and rescinds rules and procedures for the administration of the Act and for the resolution of disputes arising under the Act; and (3) in disputes under the Act, decides appeals from decisions of the Rent Administrator and the Office of Administrative Hearings (OAH). The RHC generally hears and decides all matters as a three-judge panel.

On October 1, 2019, the RHC became an independent agency with in accordance with the Rental Housing Commission Independence Clarification Amendment Act of 2017. Prior to October 1, 2019, the RHC functioned for decades as an independent body that was administratively supported by the Department of Consumer and Regulatory Affairs and most recently, the Department of Housing and Community Development.